Oh What a Night! Michael Jackson on the Danforth! 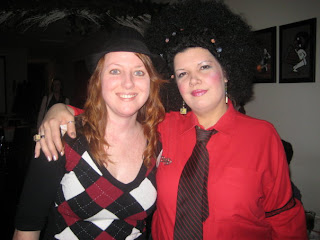 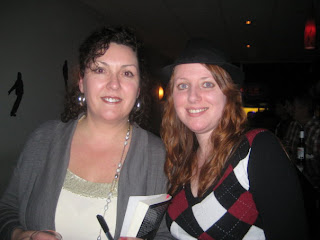 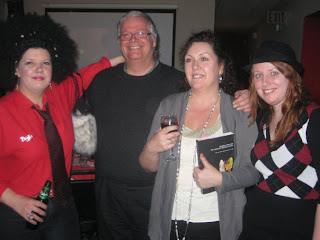 Some days, heck some weeks are just big! Last night I attend the book launch for Goodbye Billie Jean; The Meaning of Michael Jackson! I drove 2hrs to attend in Toronto, just on Danforth at Coxwell at a lovely place. I enter the bar and immediately meet Lorette Luzajic for the first time. She had warned me she would be dressed somewhat unusually but somehow her big afro wig suited her. It feels like we're old friends we've talked so much online! Also in the crowd were two other contributors, Ralph Martin and Tara Stevens! What lovely people and how inspiring to be surrounded by other writers! I hope I get to work with them on another project some day!


Lorette was a little surprised when the local paper SNAP Danforth showed up but their photographer was gracious and took pictures all over the place.

The most exciting part for Lorette(and all of us) was that the event was being filmed by a crew for a documentary on Michael Jackson fans. Michael Pihach from Ryerson University's broadcast studies school was there with his crew and interviewed the entire night and filmed the event. I did an interview about what Michael Jackson meant to me and hopefully a little of it doesn't end up on the cutting room floor! He's promised me a dvd when it's finished :)

Lorette also took up a free-will offering for Team Michael for Unicef which raised a nice tidy sum to donate to the efforts that foundation is undertaking in Haiti. Michael would have been happy!

And another shout out to my local, the Tavistock Gazette for the article today. My kids were in the photo and think it's wonderful!

I scored a copy of Lorette's book for my brother and had my copy and his signed by the other contributors and signed quite a few myself. Then I watched the Olympic hockey game(Go Canada)and chatted to Lorette's sister.

I think I must write more poetry...

Anonymous said…
Hi! It was a wonderful evening! It was a pleasure meeting you and the other authors in the book. We had a grand time! Looking forward to connecting with you in the future.
"Lorette's sister!"
February 25, 2010 at 9:54 AM

Carolyn R. Parsons said…
Thanks Stephanie! It was a pleasure chatting with you and it was indeed a grand time! Lorette's got a great project there and it should have great success..I'm very proud to be a part of it! And it sure was nice to be in Toronto again!
February 25, 2010 at 11:14 AM

Marguerite said…
Your life is getting more exciting with each post! So glad you're having fun and enjoying life! Best wishes for your continued success! Cheers!
February 27, 2010 at 9:27 PM

fairyform said…
It was obviously one of those parties worth remembering. So many things happened and all of them were so much fun!
March 3, 2010 at 11:07 AM