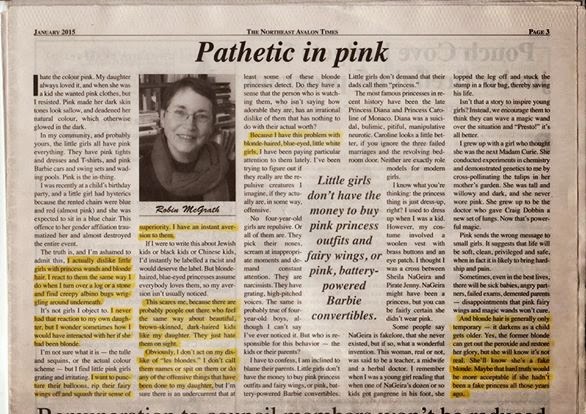 Let me start this by saying that I am am an unapologetic feminist.  I am also the mother of four daughters. I have maneuvered through the obstacle course that is placed before women in this life and turned over a few rocks and logs and uncovered a few slugs in my days just as the author above has.

I too have felt an aversion to the signs and symptoms of a culture that bombards girls with messages that tell them they need to look, speak, act, behave and be different than they may well be intrinsically. (I'm also aware that the culture does this to boys)  I'm painfully aware of the so-called "princess culture" propagated by media and film(Disney in particular) that says(I'm simplifying) that girls need rescuing by boys and I've felt complete disgust at pageantry and beauty contests that seem to value girls based entirely upon their appearance. I've been careful to create counter messages in my home to balance the ones that state girls are less than or greater than based upon the make up product they use or the jean size they wear.

It's a tough job and a tiresome battle. But I do it. Because I have girls. Because I've been a girl.

Somehow though, in all my years of battling the patriarchy, the culture, the stereotypes and all the garbage that I've seen that creates the imbalance between the two most common genders, I have managed not to project the distaste I have for all of the things that seem to work against me as the feminist mother of girls, into a distaste for little girls, not even those that don't look like mine. Heck I haven't propelled it into a distaste for little boys either nor the men they eventually become, at least not in a general sense. There are certain specific men I don't care for but it's based upon actual knowledge of their character, or lack thereof, not something as frivolous as their appearance.

I've managed also to avoid the pitfall of judging parents, particularly mothers(because let's face it mothers' parenting is judged far more harshly than fathers') because I've been mothering for nearly 25 years and realize that parenting evolves over time. My feminism evolved over time as well and with my youngest being nine and the vast number of cultural changes happening in these current times it may evolve further.

I also, as a writer myself, try not to judge other writers. Writing skills evolve over time as well. That said I do have a fair to middling understanding of writing and I'm a decent communicator.

So it's out of my comfort zone to address all of this in a blog post but I feel that the above needs addressing, particularly since the message I'm getting from the editorial and defenders of this piece is that it is satire.

Because I'm very busy and this isn't a professional piece I'm going to post a definition of satire from Wikipedia.

My understanding is that the definition above is about shaming an individual, ideology, corporation or society itself into improvement.

Now I have no problem with any of that. I've been known to use this sort of technique on an occasion or two myself.  I can be scathing and brutal in fact. And I must admit, I enjoy it.

The problem that I have with the above piece from the Northeast Avalon Times is that the shaming is placed upon weak instead of the powerful.The individuals in this case are children. Politicians and businessmen are adults who get paid and are in the public eye. They are adults, seasoned and jaded. And I am guessing that even they have moments of hurt from some of the slings and arrows of a well placed piece of satire.

The target of satire should never be someone who is already without power.  Quite the opposite.  A good satirist uses their abilities to benefit the innocent, is a defender of the underdog and takes aim at those in power. They use their skills to knock down the ivory tower dweller, to point out the flaws in society as created by the corporations, the politicians, the government or the media or any organization that has influence to try to redirect them through humour and exaggeration to show the foolishness of their points of view.

That is why Robin McGrath's article misses the mark.  The target is children and they are the innocent.  If you're going to get all up in arms about the "princess culture" you don't  pick on the princesses. You pick on those who propagate the culture-mainly the corporations and fashion industry in this instance but the broader culture who still acts like girls need rescuing.  I wager however that most princesses have many more dimensions to their character than a tiara and glitter might show.

In this article the focus is on the children-even if it wasn't meant to be--and it's not pleasant.  The writer admits to her absolute disdain for little girls of a particular type. Once that happened the rest fell by the wayside.

The target of this article isn't Disney or society or the government. It is very specifically little blond girls which is an odd thing because I've not noticed that the princess culture is made of specifically of the fair haired. Even Disney has a balance in the hair colour department with Jasmine and Pocahontas for example representing the dark haired contingent.

Any point she is trying to make gets completely lost in her own emotional venting. This venting takes on three main aspects.

First of all there is her strange and worrisome aversion to blond haired girls.  It is apparently a visceral aversion akin to the feeling of discovering bugs under rocks (a place I would contend the author spends considerable time.)

Second to that there is a judgement of the parents of these same children. Parents who are doing what parents do. Making their children happy.

Third, and the most disturbing part of the whole thing,  she makes it abundantly clear that the only reason for her disgust of these children is their appearance.  In fact she's OK with her own daughter because she doesn't look like these specific children that she sees as thinking they are privileged and superior.

In a culture that bombards girls with the message that their appearance is their most valuable trait this woman judges an entire group based solely upon this trait and justifies it by saying that these are the privileged so it's OK.  And yet somehow contends that she's a defender of girls?

The writer states emphatically that she's never acted upon these feelings.

I counter that she has. Through her words in the article and her admission of an absolute disdain for little blond girls, she has acted upon her thoughts. Writing is a verb. An action word.

Perhaps these revelations are cathartic to the author and she obviously is aware of how bizarre they are when she wonders if there are people out there who have an aversion to children who look like her daughter and hints at discomfort at that thought.

I wager there aren't many and if there are I hope they have the wisdom to reveal these rather deeply disturbing thoughts to their therapist and keep it off the written page until they've fully dealt with their issues.

It is her contention that the only girls of value are those who mimic Madame Curie or some other elevated(by her judgment) woman yet I can't say for certain that Madame Curie didn't adore pink and I wonder if she can. I suppose Marie couldn't have been blond as a child? That would totally mess up the fantasy. I do know she wore dresses and on occasion attended balls. So any child who holds her up as a role model is totally allowed to wear a ball gown. Just sayin'.

The writer approves of a certain "type" of little girl. The kind that fits neatly into her idea of what a girl should be. She approves for girls who their role models should be and chooses the type of woman they should become. It's a controlling sort of mindset.  It's ironically the sort of thinking that pretty much created the princess culture.

It takes another kind of mindset to dismantle princess culture.  It takes the kind of thinking that says that little girls should be valued for who they are not what they look like.  That a princess dress and a construction hat are all equal choices for little girls and boys.

My contention is that it is impossible to appreciate the feminist without appreciating the femininity in a woman or girl. Yes our culture pushes pink as the girl colour and blue as the boy colour. For most people who understand and are bothered by this, it does not turn into a diatribe of disgust for the girls but rather strikes at the more appropriate target, the culture.

Her arrow missed that target.

And I have the right to aim my arrow in your direction-where it squarely belongs.