A Cat was more Sensible 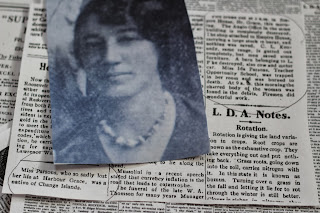 The full dollar the Parsons family paid in 1934 for their annual subscription to The Twillingate Sun set them apart from many who struggled to find a church penny each Sunday.
The January 20th edition carried the item in its North East West South (NEWS) segment at the very back of the four page paper.

JAN 17“Fire broke out at 2 a.m. in Empire House, Hr. Grace this morning.  The Anglo Office in the same building is completely destroyed."

That was the same day the goat got into the house. The animal bleated and butted in a bizarre manner, wreaking havoc in the quiet salt box home.  The elderly matron had looked on in fright as the goat ran up the stairs and rammed through the house.

“The shop attached to Empire house carrying a large stock is burnt, and nothing was saved.”

It amused some folks that Ida’s pet was a goat.  But it was supposed that a thirty nine year old spinster wasn’t expected to be practical like her nineteen year old sister-in-law Bessie who had come as a serving girl for the family and wed the forty six year old bachelor of the home, Walter.

Irritated at having to fix up the mess Bessie gave the cat rubbing around her legs a drop of tinned milk.

A Cat was more sensible.

“C.L. Kennedy, same range, is gutted out completely but men saved some furniture."

Prosperity and literacy had provided rare options for Ida.  At thirty nine she was one of the first six female adult education teachers with Opportunity Schools.  These remarkable women worked in communities around the province teaching night school to local fishermen and their wives.

Books adorned every shelf.  Newspapers were stacked and kept and clipped into scrapbooks.  Bessie was immaculate in her housekeeping.

“Sure he misses Ida.”  The old lady said of the cat that had jumped in her lap for a curl and a rest.

A newspaper clipping stuck out of the Bible on the table by Mrs. Parsons along with the telegram.

“Miss Ida Parsons, Teacher Opportunity School, was trapped in her room and was burned to death.  At 9.a.m this morning the charred body of the woman was found in the debris.”

One other line, an afterthought sandwiched between a report on Roosevelt’s Industry Recovery Plan in the USA and a social note on the mate of the S.S. Clyde arriving in Lewisporte, served as an obituary.

“Miss Parsons who so sadly lost her life at Harbour Grace was a native of Change Islands.”

They did save some furniture.

A cat was more sensible.

Bessie went out to feed the goat.