A Pilgrimage to Beaumont Hamel; One Man's Trip to his History.

This piece was published in the newspaper last week.  This however is the unedited version.  I thought I would share it here now in honour of Remembrance Day. 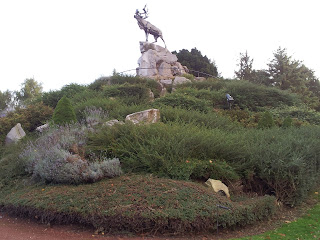 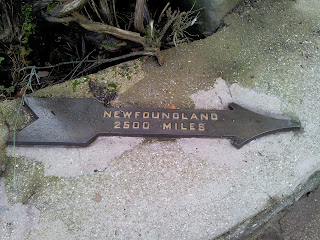 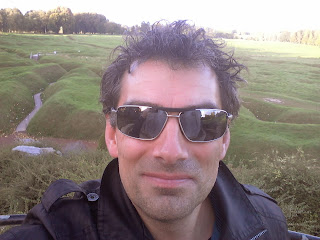 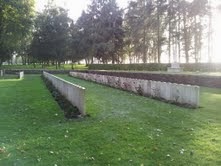 Journey to Remembrance;  A Pilgrimage to Beaumont-Hamel.

On his drive through the countryside toward Beaumont-Hamel it rained.   But by the time Tony Roberts arrived the sun was shining and illuminated the green knolls and brightened the entire field.  He had no idea what to expect but immediately recognized the monument that is like the one in Bowring Park and he called home to his parents and sisters in Joe Batt’s Arm.  It was an emotional call for all parties particularly since his family wasn’t aware that he was going there.    He spent hours and hours there, by himself, sitting back, watching the rabbits on the field.  There was no noise. It was quiet.  It was peaceful.

And he took pictures. In one of them the crimson path weaves serpentine-like through the green banks. They give the illusion that they are streams of blood.  Perhaps it’s a trick of light in the photograph or perhaps it’s by design that the walkways through the trenches on the field at Beaumont Hamel appear as veins traversing what is known to Newfoundlanders as a place of the most horrific violence.

Mr. Roberts is fully aware that there on  July 1, 1916  the newly formed Newfoundland regiment was all but completely annihilated in their bloodiest engagement of the first World War.  These young men were ordered to go only to be picked off like wooden ducks in a carnival game.  After a mere thirty minutes it was all over and on that fateful day the blood in those trenches was owing to no optical illusion.

It changed the course of history for the entire island, driving it further into poverty at the loss of so many breadwinners.  Gone were fishermen, teachers, lawyers, businessmen from every community around the coast.  Gone was a generation and all their heirs.  Gone were the future leaders of the country and this one single event, half an hour long, led to a different Newfoundland and it exacerbated the existing conditions of economic decline that already plagued the small island nation.

Tony Roberts sat alone for many hours at Beaumont Hamel contemplating just those sorts of thoughts.  Born at Change Islands, raised in Joe Batt’s Arm and now living in Halifax, Nova Scotia, he made the pilgrimage to the place that had determined that yes, unlike so many others,  he, his siblings, and his father would exist after all.

He had been to Europe previously with others in his family but for some reason they had never gone to the place that had so impacted them before even his father was born.  Fred Roberts, his grandfather, had fought at Beaumont Hamel and survived. He watched his comrade Fred Waterman shot in the back and another Change Islander lose his life.  The impact of that event trickled down through the entire family and all were always acutely aware that World War One played a large part in their lives through the generations.

“I went to all the concentration camps in Germany before but it’s only this year that it really became apparent to me that I have to go there,” says Mr. Roberts of the Canadian Historic Site in France.
Between work engagements—Mr. Roberts is head of Sales and Marketing of the medical Division of Toshiba Canada-- he drove from Holland to Paris with the intention of doing just that. His first visit was to Flanders and the museum there.  The museum had displays from countries all over the world and he spent two hours there first.

“They had rebuilt the tower which was destroyed,” he says.  He viewed some of the grave sites in the area also.

But it was Beaumont-Hamel that was his real goal so he drove towards the site and arrived just an hour before the office closed.  After touring the museum he walked outside to the meadow where nearly a century prior his grandfather fought his final battle of the war.

“The surprising thing for me, as I started to enter Beaumont Hamel was why the heck were they fighting out in the country.  It’s not near anything.  If there isn’t anything there now, what was there then.” He says of his first impression of the historical site.

“It did not seem to be a typical place like a city to fight a battle,” he adds.

According to historical records the Advance at Beaumont Hamel was the beginning of the Battle of the Somme.  The point to the advance was to move forward and take the Valley of the Somme and move the German Western Front back as part of the ultimate goal to defeat them.  Like a foot ball game takes yards and moves towards the opposing end of the field, so the armies were battling for territory.

The first wave of soldiers over the parapet were taken down by German gunfire before they got over the top.  Many of these men fell back into the trenches injured, dying or dead to such a degree that the Newfoundlanders that went after them had to go across the field because the trenches were blocked by the casualties. This added 250 additional feet of unprotected area through which they had to advance  before even arriving at the area between the German and Allied front that was known as No Man’s Land.
It was there that Mr. Robert’s grandfather, Private Fred Roberts,  was felled by artillery fire.

The story that ninety year old Dan Roberts tells of his father’s experience is gruesome.  It is relayed by his daughter Carolyn Freake, older sister to Tony who knew the grandfather who had passed away before her younger brother was born.

“My grandfather didn't fall in the trenches, he was shot when they were ordered up to advance toward the German line.  He was shot and lay on the ground called no man's land for three days, being passed over for dead.  On the third day he woke from being unconscious and saw two Red Cross men standing nearby.  He called out to them.  They went over to him and they told him they left him because they thought he was dead.  They picked him up to bring him back to the trenches when the Germans opened fire again,  He told the men to drop him and run to save their own lives. They told the sergeant when they arrived at the trenches that they had left a wounded man outside.  He himself (the Seargeant) ran out ,picked him and brought him back to the trenches.  (In the original battle) When they were advancing toward the Germans he saw his friend Fred Waterman fall......”

And as the younger Mr. Roberts sat there on that monument, looking out of the fields for several hours he couldn’t help but contemplated how things could have been different.
If the bullets had been just a few inches in another direction—Fred Roberts lost his left arm in the battle perhaps because of his forging into the hail of bullets “with their arms above their helmets as though going into a winter blizzard instead of a storm of German bullets and grenades” as it’s described by eyewitnesses from that time in historical writings —or if those Red Cross men or that anonymous Seargant hadn’t saved him, he would surely, like most of the other men, perished on that field.

His grandfather’s name would have been listed on the wall of the dead or missing and the bench where he sat would be empty because he would not have even been born.  If Fred Roberts had not survived, there would not have been a love story between him and the new Change Islands post mistress, Caroline Sceviour of Exploits a few short years later nor the children Ruth, Suzanne, Elizabeth and the father of Tony Roberts, Dan, would have been born.

“It was not just those men lost.  It was all of their descendents.” He says.
It was this thought that filled his mind, the idea of all of the potential that was wiped out due to what he refers to as “some foolish war.”

And as he sat there his thoughts were “Gee Whiz, what would I do if I was on that field for three days. The longer I sat there What would I do, what was going through my Grandfather’s mind as he lay on this field?  I think the biggest thing for me was what a blessing it is that I’m here.  How many people?  When I look at the walls of people that died, how many descendents are not here today because of that war.”

“It’s all a fine thread, we’re all here by a fine thread,” he muses and his visit to Newfoundland Memorial Park such a prominent place in the province’s history made that sentiment very personal and real.
Private Frederick George Roberts, was much more than #440 a war veteran and survivor of Beaumont Hamel.  Granddaughter Carolyn remembers her grandfather well and to her he was simply Bappy.

“When I look at the photos of myself and Bappy I think how well he managed without his left arm and it amazes me. He used to put me in a blanket and pull me up and down the stairs all over the house.  He took me on the harbour when he used to skate, and he would pull me on my sleigh,  We still have his skates,  I remember going to church with him, ,eating at the table and kneeling down to say Grace.”
They all lived on Change Islands still then and she has memories of his kindness to the children of the town.
“He would fill his pockets with candy from the shop and we would walk up to the school hand in hand and when the kids came out we would throw them in on the playground. Would laugh so hard watching them all running to get what they could. He was so kind to everyone”

After strolling through the gravesites, the monument, the fields, and experiencing the emotions of being on that ground where a nation was altered forever by the loss of so many of their future businessmen and politicians and teachers and fishermen Mr. Roberts feels compelled to learn more about the events and particularly his grandfather.

The grandfather he never knew survived something most he shared that experience with—The Advance of Beaumont-Hamel-- did not.  And this year on November 11 the remembering will be more poignant, the poppy have more meaning, the gratitude for all that was sacrificed carry more weight.

This profoundly moving experience is a pilgrimage more should make.  It is something that should be impressed upon generation after generation to make them understand all that was lost and all that was gained when young Newfoundlanders go to war, then and now.

We need to make a connection to the humanity of those men who lived and died a century ago, to understand how very real that battle they fought was, how, as Mr. Roberts said, war is indeed quite “foolish” though there is no doubt that the first world war was for the greater benefit, to defend the freedom we enjoy today in our country.  We need to do these things and we also need to attend the memorial services and share the  history with our children so they can pass it along to theirs.
We all also need to wear that poppy on November 11.  Lest we Forget.


When one was lost