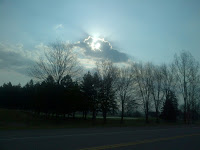 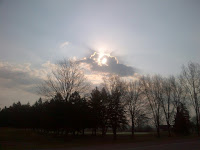 It was a regular day on a lonely country road, silence filled the car and my mind was focused on the errand I was running.  Then I glanced towards the east and saw the scene above.  Dinker dinker dinker..signal light on and you know I had to pull over.
I lowered the window and snapped two pictures, one after the other, of the breathtaking scene before me.  Then I sat and watched for a while as the clouds sifted and shifted until it gave me the full heat of the sun on a unusually warm March day.
With a sigh I left the scene, not really looking at the pictures at the time, just looking long enough to know I had captures some of that moment.  Then I forgot about that moment until today.
I thought I would post a poem I had written and figured the photographs might suit it.  But when I looked at them I realised they were a better fit for a topic  I'd been thinking a lot about recently.
Look carefully at the photos.  They were taken one after the other with the same device.  Yet they are decidedly different.  The one on the top has a bluer tinge to it, it's brighter somehow than the other, which is odd as I didn't really do anything except snap the photos.  Yet, that slightly different shift, that ever so subtle difference in one moment to the other, shows clearly in the photographs.
The same is true of humans.  One little shift, one incident, a seemingly accidental meeting can change the course of your life and certainly your entire perspective, in an instant.
There can be a quantum shift in your perspective at any given moment by virtue of the choices you make, the people you meet and the way you accept what appears.
I know that my life today doesn't look at all like I thought it would a year or so ago.  That isn't a bad or good thing, just an observation.
One thing I have learned over the past couple of years is that I do not have within me the capacity to be unhappy.  Perhaps it's because of my ability to forgive instantly, to accept readily and to move forward gratefully whenever I encounter what others see as difficult.
I just can't sweat the little things and truthfully, I don't sweat the big things much either.
Then there is the difference in perspective we have, one from the other.  And while I don't always understand someones perspective I certainly allow them the benefit of having it and understand that it is what it is.  I also understand, that like mine, it may change in at any given moment.  That it is dynamic, shifting and flowing, as new experiences creep in.
I was recently in New York City.  As we arrived I was completely awestruck by the sheer size of the place.  I had never been and had never fully understood how very massive it is.  That my dreams of the place didn't even come close to the reality.  And even now, I have difficulty comprehending how large it is.  And yet, compared to the universe, it's but a speck.
I commented on my face book something to that effect and somebody replied, "there are a lot of yellow taxis".  I chuckled a little at the differences in our perception.  I was deep into being in awe of the collective creative intelligence of the human species that had built such a marvel while my face book friend was in awe of how many yellow cabs the city has. Her mind and my mind, seeing what we see from our own perspective, noticing different things about the same place.  Almost as fascinating as New York City.
One thing I've never changed opinion on is that I believe that the very best thing about life is that it is unfinished until it's finished!  Of course my perspective on that may change at some point!
Enjoy your day!
Email Post
Labels: Perspective