Ride of My Life! 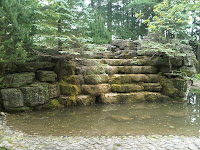 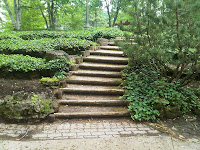 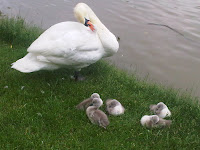 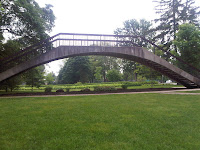 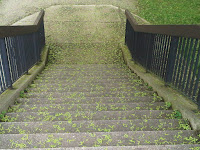 The other day I expressed my desire to ride along with a group of storm chasers following a tornado.   What? That's a completely sane thing to want to do.  It's fun.  Exciting.  You get to marvel at the miraculous wonder and power of nature and if you die you die...you're gonna anyway and what a great story!

No, I didn't go storm chasing~yet.  Instead, today I had a solo adventure.  A mini adventure.  Just an hour alone to explore.  It was probably in and of itself an ordinary thing.  For me it was just pure bliss.

I had to run into Stratford to drive my little grandson and his dad to the Doctor(ear infection~poor little guy) and thought I may as well toss my bike in the back of the truck and take a bike ride around the lake.  So after my Gigi duties were complete I hopped on the bike with my blackberry(for pictures) and a bottle of water I set out.

My daughter had suggested I go down the main street to get to the lake but I decided to take some back roads...but I wasn't sure which way to go,  I just knew the lake was to the west.  I get to the end of one street and then I saw it.  An opening into the woods.  A trail!  An new path!  I could not resist.  I didn't care if I saw the river. (Ok..it's supposed to be a river but it looks like a lake.  So if I mess up...it's the Avon River in Stratford Ontario).

Oh the treasure I found.  It turns out this path led to a woodland park!  I had never even known it existed.  There were walls with plants and park benches and a staired bridge over nothing much at all.  It was like a fairy land with the sun beaming through the large oak and maples that left dapples of hot light splattered on the forest floor.  I feasted on the magic of the place and took some photos before following the path along hoping it would take me to the Avon.  Sure enough,  I cleared the trees and there was the river before me with its winding path and swans swimming quite at their leisure in the hot and humid afternoon sun.  And it seemed that when I emerged from this magic grove the entire world had become brighter, better and more exciting.

Perhaps it doesn't seem exciting but as I followed the trail around the river it dawned on me that this bicycle trip was a micro-version of life.  First of all I had no idea where I was going really when I entered the woods and none of us do when we start on our life journey.  I could have chosen any direction but I chose to go straight through into a place where I couldn't tell what was on the other side.  If I had gone right or left I would have been with the traffic.  The woods were solitary.  Not a single other person enjoying the gift of its beauty.

Just like in life I stopped and breathed in the scent of the air.  I recognised lilacs and other sweet smelling but unidentifiable flowers.  I walked about and explored the different structures and I took photographs to record my memory of the place.  Then as in life I climbed the steps that were there to the top of a bridge that went nowhere.  I climbed it simply because it was there and pf course,  for the view.  I've climbed many hills in the past for just that reason and I'll be climbing many more, some to revisit memories of the past, some to make new memories upon when I go to Newfoundland this summer.

And then I hopped back on my bike and followed the winding trail along the river.  Just as in life I moved aside to let some people pass.  Sometimes they moved aside for me.  I smiled and said hello to those I met along the way.  Sometimes the birds flew away from me as I whizzed past, some simply stared with curious eyes.  I was careful not to hurt or disturb any of them in any way.

Along my ride I felt laughter and wind.  At one point I came upon a series of mud puddles and decided to go through and just as in life, when you encounter something messy usually something comes alone to help clean it up and always a clean puddle followed each muddy one.  At one point I saw before me a large pond of probably 12 feet or more in length and perhaps 8 feet wide across the path.   I slowed down for just a moment.  The water had gathered from the night before and I had no idea how deep it was.  Then in a moment of impulse I sped back up and whooshed through the pond at the fastest speed I could get up too and the cool water soaked me as I rode through it with a whoop of joy!  A lady on a bench nearby laughed out loud and as the my feet struck the water at the deepest point I rejoiced in the impulse that had splashed and refreshed me all at once.

Sometimes you just have to get wet!  (Don't even go there with your dirty minds~all right, I admit it, yeah..I went there too, now back to seriously meditative musings ok?) Occasionally in life you just have to follow your heart without thought.  It is those times that you value the most and remember with the greatest fondness.  I will never forget the sound of the lady's laughter as she caught the joy of my antics.  It was worth it just for the memory of that.

Around I went until I came upon a mother swan and her babies.  I slowed down then, not wanting to disturb this beautiful family.  They started to move a little, the downy infants making the most beautiful whistling sound.  I'd never heard the song of a baby swan before and it was beautiful.  So I dismounted and stood patiently while their sense of danger passed.  I set my bike against a weathered tree stump and slowly and patiently made my way towards them.

I whispered to the mama under my breath that I would never hurt her babies and it seems she believed me because she let me slowly come near enough until I could sit on the bench in front of her.  And again it mimicked life.  Because in order to gain someones trust it is best to move slowly and patiently and to understand that if they aren't comfortable right away with you that perhaps it's because they've found it difficult to believe in you from some other experience in the past.   I video taped the family Swan and then sat in communion with them until her babies slipped back to sleep in front of me with no sense they were in any danger at all.  I slipped away then to finish the rest of my journey.

In life sometimes we meet up with the same people at different times in our lives.  Sometimes this is a better time to meet them, perhaps there is more room for them now than then.  Life sends you where you're supposed to go without fail.  Time and life does seem to be a circle and as I came back the opposite side of the river I saw again the swan and her babies.  They had come to the other side, nap time complete and swim time the next thing on the schedule.  So I stopped again for a moment to reconnect with mama and to watch the adorable cygnets playing.  They are truly beautiful.

I passed a black swan, the only one in the group of Stratford swans and noted how very different and alone she appeared to be.  Her mate was lost a few seasons ago.  But then I noticed that she seemed content alone.  She had a beautiful lake and other birds for companionship and hey, she was still a beautiful swan even if unique and without a mate.  In fact if she was a smart swan perhaps she would gain something from being unique and alone.  Without encumberance and responsibility to others we are free to live for ourselves.  This was also a lesson that resonated with me.  That we are still who we are even if we are alone.  That we are defined not by the roles we play but by the person-or swan-that we are inside.

So back through the forest grove I went and then on to the street until I made it back to my starting point which is where we are all heading on this journey we called life.  I have heard it said that we come from "nowhere" to "now here" and then back to "nowhere" and then back again perhaps.  I am not sure but I believe it might be a possibility.  I enjoyed my ride but more than a simple bicycle ride, it was indeed an event.  An adventure even.  Just as life is.  Each moment is an event if you choose to make it one.

Adventures are what life is all about and something as simple and common as a bike ride on a new and untraveled path can reveal some of the most excited truths about life if you care to take the time to notice.