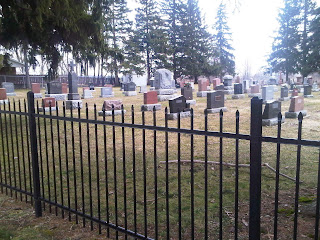 It is with a heavy heart that I write this post.  I fully intended that this blog would go on for many years but Harold says no.  And if Harold says no then it must be so right?  No not my father Harold.  The other guy.  Yes I know there are quite a few Harolds around but I'm talking about Harold from the Bible.

Here is the thing.  People are talking about the rapture like there's no tomorrow.(totally stole that and would give credit if I knew who said it first. Seriously funny!)

I have read the Bible but I must have missed the book of Harold Camping.  But he must be in there. It's all over the news and the internet.  And he has a mathematical formula that he used to figure all this out.   He used MATH folks.  That's smart!   I googled because I am google master and queen of the world and so I must know these things.

See, Harold announced last week that the Rapture will occur May 21, 2011. It was originally scheduled for September 1994 but passed without incident. Oops..he is a prophet, not a mathematicician. Silly Harold.

Here is the formula.  It's..um..remarkable.


1.The number 5 equals “atonement”, the number 10 equals “completeness”, and the number 17 equals “heaven”.


Thus, Camping concludes that 5 × 10 × 17 is telling us a “story from the time Christ made payment for our sins until we’re completely saved.”

See.  Math.  That proves it.  Now...I had no idea that the number 5 equals atonement.  No clue that 10 equals completeness and 17 equals heaven.  Obviously there are huge gaps in my mathematical knowledge.  I ain't no brainiac like Harold I reckon.  I do know that 8 is the symbol for infinity though..shouldn't there be an 8 in there somewhere?  Uh...what do I know..I'm no prophet.

Anyway at 6pm EST. the he shall come to judge the quick and the dead.  I wonder where I fall? I'm not dead..but since I hit my forties I'm not all that quick either.  Perhaps I'll speed up from the adrenaline of apocolyptic terror. We shall see.

So anyway, Harold says it is true, so it must be.  He is the prophet and he's only been wrong the once.  That other time when he did the math wrong.  He's got it down now for sure.   I wonder what went wrong that time, perhaps he forgot to carry the one somewhere.  I do that sometimes.  No worries Harold!

So now, back to practical matters.  What do I do for the rest of the day.  Well I figure I better blog because I know all of you are out there, awaiting the end of times going, this wouldn't be so hard to take if Breeze would just blog.  So I'm doing it for you.  Because I care.  I'm like that.

I also took stock of how things look for me and I think perhaps the saviour is gonna shuffle his feet, look a bit sheepish and say, "Sorry Breeze, you're one of the doomed, can't take ya" and you can bet I'm gonna ask why.  That's the way I roll.  I'll tell him, I give to charities, I practice unconditional love to the best of my abilities, I try to spread a message of tolerance and good will and service to human kind,  I love people and the earth and animals.  I took the  do not kill message to the extreme and don't eat animals. I wrote a novel whose underlying theme is the acceptance and tolerance of all spiritual beliefs.

And he's gonna feel bad but I know he'll avoid my eyes and say "but you didn't go to the right church" and I'll say "which one is the right one?" and He'll say "the Church of Harold, duh" and I'll say "but my father's name was Harold" and He'll say "sooo close, but wrong Harold"  and shake His head sadly, because you know He wants me to come. Jesus got wine, made it himself and He knows I'd be fun at a party.  But I will accept that and say, "OK, JC." and we'll high five and He'll carry on to the flock of the Church of Harold, just a little sad.  I didn't want to make the saviour sad darnit.  Amen.

So, here I sit, having a coffee on my front porch,  friggin doomed.  The sun is shining today.  I was hoping to have a tan before Jesus came but this has been a really wet and rainy spring.  I won't be wasting this day doing housework, no way.  OK.  I threw in one load of laundry out of habit but I'm not folding it.  I made my bed but that was before I remembered the Apocalypse.

Perhaps I should see if I did everything on my bucket list before the end of times. Wrote a book, yep.  Flew a plane.  Check.  Did some fun stuff I always wanted to do that I can't talk about here because it is super seekrit.  Oh yeah baby!

I have one regret.  My Bruins were gonna win the Stanley Cup this year.  Darned judgement day interfering with the playoffs.  This is ridiculous.  See, how can one be ready for Jesus with shit like that going down uh? I'm sinning in my mind just thinking of it.

But wait.  I found something else on google.  It says that today is the judgement day so only the flock of Harold get to go today to heaven.  The rest of us suffer on earth for an additional 5 months.  Awesome!  So the playoffs are back on!  I'm pretty sure Chara isn't gonna make the cut today after that hit on Pacioretty a couple months ago. I'm not seeing redemption in his eyes. Or any of the players in the NHL.

And just when I was thinking of giving Harold a call and saying, "hey buddy can you hook me up" too.  Can't be off to heaven during the playoffs, oh no sirree.  I'm still not doing housework though.  The next 5 months will require constant diligence against zombie attack.  I have to focus.  I also have wine.  I picked some up since I'm not invited to the heavenly wine and cheese event.

So happy rapture everybody.  To the saved, happy heaven and say hey to JC for me.  For the rest of us doomed to eternal torture it's get ready to fight the zombies, and the Tampa Bay Lightening.  Go Bruins.
And Harold sure is lucky he's going to glory because with all those math brains he has the zombies would be all "buffet time" on him!

Oh, and I think I'm going to drive orange camaro fast today...because ,well, there just isn't all that much time for slow driving!

One more thing.  If Harold's math is wrong(because I really think that there should be an 8 in there for infinity) or if the Internet is still on after the rapture, I'll be back blogging next week.  After all, who else is gonna be keeping track of both the playoffs and the zombies uh?

RNSANE said…
Oh,my god, all that math slays me. I was, and remain, horrible at it. I managed to make it through nursing school, though, 45 years ago when we had to figure out all those drug dosage ourselves. Now, the pharmacy does it all. Lucky nurses of today!

So "the rapture" has come and gone. Okay by me. At 66, I don't see or feel too much rapture anymore. It happens so infrequently that I could jot it down in my notebook on those occasions that I experience it. One notebook has lasted me much of my lifetime!
May 23, 2011 at 3:02 AM