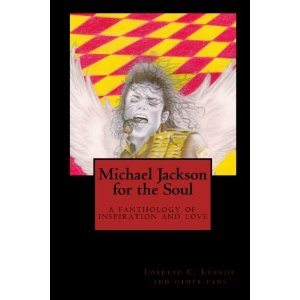 Last year I attended the launch of Lorette C. Luzajic's anthology of work about Michael Jackson entitled Goodbye Billie Jean;  The Meaning of Michael Jackson.  I am very proud to have been a part of this project and you can see my contribution is mentioned in one of the reviews.

Just last week she announced that her second book about Michael Jackson, a fanthology by fans for fans, was released on Amazon entitled Michael Jackson for the Soul and again I am honoured to have a piece published in this book as well.

In the coming weeks I hope to have an interview with Lorette here on the blog, meanwhile check out both books and if you're a fan of either of us, or Michael Jackson and you have a little Christmas money left over, order a copy!

A portion of every book sold goes to Kids Help Phone, just as Michael would have liked!