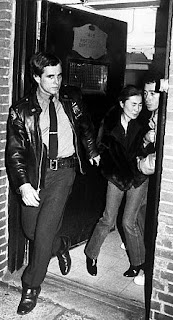 Imagine you are strolling along one day with your soul mate, the person you love more than anyone in the world and an assassin murders him, shoots him in the back, right before your eyes.  Imagine you cradle him and weep, your fear and disbelief as real as the blood that pools around you on the cold December sidewalk.  Imagine your sorrow, your pain, your anger as the life leaves the body you adore in one fatal and final breath.  Your screaming chisels your emotions into that bitter December air etching them on your soul as if they were the epitaph on a marble slab.

I always feel saddened on the anniversary of John Lennon's death.  I feel the world was robbed of one of its geniuses and truly great minds but always, on this day, my heart tolls a sad slow rhythm for Yoko Ono, the woman who loved him so.

Their love was rare.  Most never find it and some that do, waste it.  Yes they were an odd couple, certainly they were unorthodox and imperfect but one thing was certain, they were completely and utterly in love.  They spent every moment together.  They supported each other, they took care of each other and they walked as one on the path they travelled together for just a few short years on this planet.

I imagine, deep in my soul, her sense of longing for him into the moments, hours, days, months and years that left her without the physical presence of John in her life  but I also imagine he was beside her, living in her every thought, breathing in her every breath, his heart beating with her every heartbeat just as it did when he lived with her.  I imagine John Lennon stayed nearby when he slipped out of his body, and still holds Yoko's hand as he always did.  It's what I would do if I loved a person in life as John did Yoko and had to leave them suddenly.

Yes we miss John today.  We always have the wonder of what might of been, the unwritten songs, the unspoken wisdom, the sense of loss on a world level, but my compassionate soul that recognises such transcendent love, aches mostly for Yoko, thirty years from that tragedy in New  York City.  You may say I'm a romantic(yes I just did that) and I wouldn't argue it at all.  But I truly do believe that Yoko and John had one of those connections that was made before either of them were born and will last for all the forevers to come.  One that you wouldn't believe in or understand until you found such a love.

Walk in Peace Yoko Ono.  John still walks with you, today and always.

And below, my own personal favourite John Lennon song.

Karen Baldwin said…
OMG! What a beautiful tribute your post is. Love, love, love that video. And I share your sentiments.
December 9, 2010 at 6:00 AM

Alli said…
That's what I loved about Yoko & John Lennon, they didn't fit into any particular mold. They did what felt good for them without apologies.
If we are fortunate to cross paths even through music with someone so full of writing genius then every minute has been worthwhile.....
Give Peace A Chance!!

Unknown said…
never will I forget the impact his music had on me. My first universal experience blossomed while listening to the song 'mother' !