I have an iPod and a lesson in forgiveness! 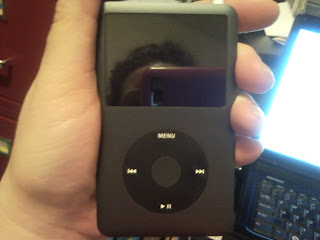 I have a brand new iPod.  A few weeks ago my old one disappeared so this week I bought myself a brand new one.  It's a beauty.  A classic with 180GB which is more than big enough for me.

I have been listening to all of my pod casts including my favourite, the Hay House Radio program, Excuses Begone with  Dr.  Wayne Dyer.

In the course of one of the shows he starts talking about forgiveness and during the conversations says to a caller "In order to forgive you must have placed blame.  Who are you to blame anyone? Who are you to judge?"

It was probably the single most "light bulb" moment of my life.  I have spent a lot of my time forgiving people.  I try to understand and let go of the hurts they've caused me and I've also done the same to myself, taking the time to forgive myself for my mistakes, of which there are plenty.

But with that single phrase I realised what judgement there is to the idea that we should "forgive" someone.  Inherent in that is the idea that you are superior to them in some way.  And of course there are no superior humans, we are all equally fallible in action (though flawless in spirit).

So to forgive another human is to judge them.  Every person's behaviour is a result of their perspective, their experience of life and their predisposition and personality traits.  Who is to say that we would behave better than they would if we were tossed into their circumstances?  Who is to say we wouldn't behave worse?

What I think what we humans need to focus on is compassion and empathy and love.  We need to offer understanding and try to find peace in our situations and peace within ourselves for the hurts we cause others.  Forgiveness in its regular sense is not necessarily what we need to offer.

Now I'm off to listen to my iPod some more.

Anonymous said…
WOW Breeze - this post hit me like the proverbial ton of bricks! What a profound idea! That Wayne Dwyer is one smart guy, isn't he! I love this post - thank you for sharing.
xoxoxo
November 29, 2010 at 9:33 AM

Eddie Bluelights said…
Hi there! Breeze. Long time, no see.
Popped over at a great time.
The forgiveness mention is right on the button.

The I-pods are reakky great - must get one.
Call round for a cuppa whenever you like - the key is under the mat and the kettle is the first thing you see in the kitchen LOL. Love and hugs ~ Eddie
December 1, 2010 at 5:33 PM