The Secrets of Rare Moon Tickle; A Novel by Carolyn R. Parsons 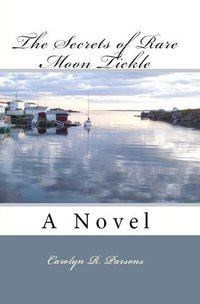 It's finally time!  The long-anticipated release of my first novel,The Secrets of Rare Moon Tickle, is finally here.  Many of you have been here since I started this book in 2009 and have supported and encouraged me and that encouragement has been invaluable.  The book is available on Amazon.com by clicking the link above.  Some of you have expressed an interest in a signed copy.  You can email me at breezedaze@gmail.com to make arrangements.  Meanwhile, below is the official press release being sent out to the media.


In a delicately woven tapestry of the mystic and the earthy, Carolyn R. Parsons brings you into the lives of Christianna Cormack and Joe Indigo. Spanning two decades, it follows the couple from their first meeting until they are ripped apart by his misguided choices. When Christianna moves to Rare Moon Tickle, Newfoundland, she is informed that there are no secrets in a small town but she proves this adage wrong when destiny colludes with nature to ensure her inevitable reunion with Joe Indigo. Their love is now forbidden and one lie leads to another. As if suspended from cosmic puppet strings, Christianna cannot escape the web of secrecy and though she tries to live a normal, happy life, she discovers that fate has other ideas in The Secrets of Rare Moon Tickle.

Parsons, originally from Change Islands, NL, credits growing up in an isolated Island community as the number one contributing factor to her development as a writer. When asked why she wrote the story she said “I simply wanted to write a beautiful story. This was the story that begged to be written and Joe and Christianna were the characters I had to write about. I wanted to tell a love story that was unlike any other and I wanted it to be airy and spiritual and beautiful and poetic. I hope I’ve accomplished that.”

The Secrets of Rare Moon Tickle is the second published work of this author. Her first, a poetry book, called Wind Rhymes: Poetry from the Breeze was released on December 23, 2009. You can reach the author by telephone at 519-342-3976 or by email at breezedaze@gmail.com. She writes a blog at www.breezedaze.blogspot.com under the name breeze. A Face Book Page can be found for The Secrets of Rare Moon Tickle by searching the title and the author can be found on Face Book by searching Carolyn R Parsons.

I just heard about your book and I am going to purchase it today, I'm sure it will be a nice story especially if it is about Change Islands. Keep on writing.