Winter Blues; Not this year! 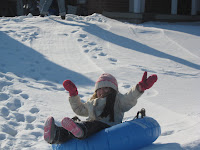 I have alway, in my adult life anyways, truly abhorred winter. It's a messy business, all that snow and fuss, unable to drive where you want to go, snow, no sunshine, snow, dressing kids in clothes that takes hours to put on, snow, warming the car, scraping the car, shovelling the step, snow blowing the driveway with a cursed snow blower that never works properly. I love Canada but hate its winters. I often wonder if the one divine mistake was having me born on a little Island on Canada's east coast instead of say, Maui? Perhaps the "W" was smudged or something and they read east instead of west.

I've decided though, that this year I won't let winter get to me. First of all I've found an advantage. When it's winter I'm going to write more because frankly, there isn't all that much else to do. In my romantic mind I cross country ski, or snowmobile and get out there and enjoy it all. In my practical mind, the one that really doesn't like frozen rosy cheeks, who gets hives(literally) from the cold and who never seems to have the right snow gear, it's really not going to happen.

So I've decided I'm not going to fight winter. If the snow blower doesn't work we won't leave the house. If the roads are slippery I'll miss whatever I have planned and do something else. I will not hate winter this year because I won't fight it.

I sat down and decided to write the advantages of winter, the positive points so that I had a reference point, something to look at when the shortened days get to me a little.

1. Christmas. I like Christmas, particularly the visiting friends, cooking dinner, children playing, carollers and Santa Clause parades. Unfortunately it comes early in winter so it won't get me through for too long.

2. The kids love it. They really do. They love to play in the snow and make snowmen and I love their ruddy red cheeks when they come in from outside.

3. It's down time. I can write more, I don't plan things, it's week after week of boredom that now I will fill up with words.

4. I can take that online editing class I've been wanting to take. It starts in January.

5. With the Internet winter isn't as isolating as it used to be.

So there are 5 positive things about winter. Today we had our first storm, my feet got wet because it was a slush storm, the car was frozen over, the kids had to be driven on icy roads to school and I made it back in one piece and I only cursed twice. I only yelled "I hate winter" three times and I only nearly fell down once. I also must apologise to mother earth for those "Bring on global warming comments" as they were completely out of line.

Clandestiny said…
I'm completely with you on this as I hate the cold too! But I have to admit that for someone who doesn't enjoy cold you've got the worse deal by far between the two of us. Here in central Texas it's miserably cold for me so I can only imagine (and shudder!!) at the cold you're going through in Canada!! I'll be thinking warm thoughts at you :)
December 9, 2009 at 12:51 PM

Suldog said…
I've never been one to enjoy the cold, either. While my friends go off skiing or such, I'd rather just sit in front of the TV and watch warm movies. Used to play ice hockey for a while when I was younger, but decided baseball was a much more sensible (and warmer) sport :-)
December 9, 2009 at 3:27 PM

Carolyn R. Parsons said…
I'm making my own sunshine this winter...yep...it's very "Canuck" and the funny thing is they've been calling this the first major snowstorm of winter..and it was rain..ha!
December 9, 2009 at 10:13 PM

Shadow said…
snow to me is magical and beautiful. but then again, i never get the chance to do all those icky things you mention, since snow we don't get.....
December 10, 2009 at 3:09 AM