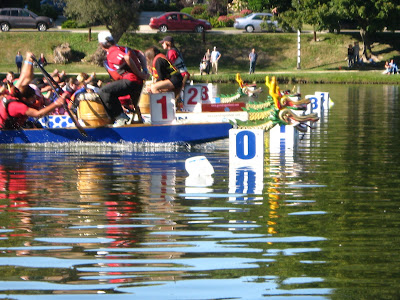 The photo finish...we are lane 3...see how close those dragon heads are!

Perfect days are such a blessing. Saturday was perfect. Early morning rise, alone, children all with their older sister, and as much as I love being their mom, a morning to just get myself ready is a treasure. Do you know it only takes me 30 minutes to shower and get ready for the day? Not the two hours I previously thought. I'm low maintenence! Who knew?

I arrived at the race site early, it was cold. There was a gentle mist hovering over the lake that created a fairly land image that I couldn't resist. I stopped and photographed the wonder that nature had created. The swans and ducks swam about quietly and birds chirped in the distance. It was hard to believe that it was a city about to come alive with noise and bustle and competition.

I was the first to arrive from our team. Others started showing up immediately after. We were nearly frozen. It was the first time I'd noticed that it was warmer on the boat then on the land.

We paddled like demons in our first race but the water was hard. We placed in D division. Unconcerned about our very slow time, we went back and hung out with the team. I love spelling mistakes sometimes. The "cinnimon" buns at the breakfast tent were delicious and fresh baked. The coffee when it eventually arrived was delicious and worth the wait. The team spirit and comarderie was priceless.

I connected with the camera man for the television news shoot and he was having trouble locating equipment so we decided to shoot most of our interviews after the second race. I interviewed eight people including a very excited little girl and our team coach who was very confused when he saw me with the mike. During the interview it came out that we had won the second race.

Interviews completed I raced to the beer tent and grabbed a cold beer. The weather had warmed up considerably the beer was perfectly cold. A text message from my husband was on my phone "where are you?" and my reply "beer tent" was met with "shoulda guessed" Hey, I'd just gotten there!

So no medals, no trophies but sometimes the hardware is secondary. I met fantastic people, I made good and most likely life-long friends, I got into terrific shape, I competed in a sport I hadn't ever considered in the past and I had a hell of a lot of fun!

There is no failure in the doing. There are only results. I couldn't have asked for better results.