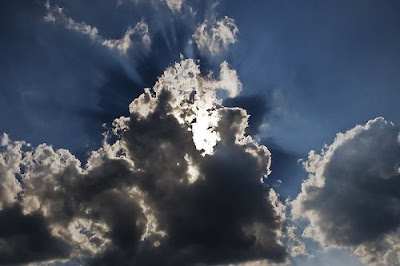 Where do we go when we die? Do we go anywhere? Is there an hereafter? Is there a heaven and hell and what do we need to do to get anywhere, up or down. This question has haunted humankind throughout it's history and is the basis of a most world religions and the cause of disagreements amongst people and groups of people. It is a thought provoking question to ponder, this I know for sure.

What do I believe? Well I don't know that we "go" anywhere. I do believe we are a part of the larger source of creative energy and that we become one with that energy in an easy manner once we are unencumbered by our physical limitations. I also believe that we can have moments of that place while still on earth.

It's a complicated topic but I know that there isn't a reward-punishment system in place. That sits wrong with me, that humans' rules would be the guideline for who goes where, that if we belong to this church or that religion, and do this thing or that thing, we will be rewarded and if we do or don't do the other thing, we are doomed to eternal torture upon our death.

Nope, I don't buy that at all because from all my experience with religious opinion in the manner the guidance, the judgement comes from humans and their definition of what God and the hereafter is rather than what the spirit that is God guides them to think and believe. I don't believe that judgement and love can exist side by side in either man or God.

There is a lot of "tell me what I believe" in religion and that doesn't work for those of us who want to learn to believe for ourselves and be authentic in our spiritual beliefs. Many churches operate on the notion that we as humans need to be told what to think and that they are just the ones to do it. This would work if there was one option but when we have a competition for "souls" going on it just doesn't seem to ring as true to this human.

I don't' believe that spirituality and religion are mutually exclusive. I believe that they can and are supposed to coexist. They are to be held and lived side by side. But the problem comes when we forget about the individuality of humans. When we forget that each of us are a part of God and not separate. We don't need to go back to God, we are already a part of the divine essence. We need to walk with truth daily and keep in mind that others have a different truth and that's ok.

There are no two people who believe exactly the same thing so how do you organise that? The human way is to conform people and make them believe, the God way is to allow them to find their own way. This might be through an organised religion, more often than not it is, however this is not the only way and not a necessary way.

I've heard it said that God appears to people in the manner and form that they can interpret it best. That makes complete sense. I know I define and know of "God" in a way that is completely real and true to me. I also accept and know that others need to see a physical manifestation of the spirit to make this work in their own minds and yet others need guidance in their journey. I know that accepting that all have a different idea and understanding of the divine is in line with the individuality of the human animal. I feel absolutely no desire to convert anyone to my truth, it is mine. People talk of "The Way" but there is no "The Way" there is only "my way" and "your way".

Recently my fellow blogger spoke of a conversation with a Cherokee Chief who defined it this way "religion is man speaking to God, spirituality is God speaking to man". How very wise. How very true.

I can picture a heaven with pearly gates where all live as one, where angels romp and play and eat cream cheese. To believe it makes it so for we all create our own reality and everything begins with a thought. I picture a place where energies meld without form into pure white love and light. It's not a place in the geography sense but a form of being, all around us and within us. A place we are all apart of now. It is of solace to me to picture those in heaven doing the things they love the most, fishing, reading, whatever their bliss was on earth. I understand the need to feel reunited with a loved one someday. I just don't think the reunion happens on a physical level. It's different. It's spiritual and it doesn't have to happen until after you die.

I wonder if that's why the paranormal and the visits of Angels and the belief in demons and spirit guides and ghosts all coexist in the human race. Is it because all of them are true? Is it because they are pure belief held by members of the human race and if thought creates reality then they are absolutely real? So the pearly-gated heaven is real and the source-light heaven is real and the Nirvana of the Buddhists is real as is the theories of reincarnation equal in validity. Moreso,for the atheist, when we're dead, it's lights out and that's it as well. That being the reality of the Athiest is also true.

Each are truths born of the pure belief in them manifested by the thoughts of humans who recognise this as their truth. How wonderful if it is! How perfect if all of the differences we see here on earth from individual to individual, from culture to culture, religion to religion, sect to sect, are all true in the after earth life. And why not? Surely after witnessing the miracle that is the human existence such a stretch is not that difficult to make.

But for now, on this earth, I believe that all are divine and all are valid and all are part of one large source of love. I'm in no hurry to see if my theories on the hereafter are correct. This world is still mine and I plan to enjoy it while I'm here. I hope you do the same. A little bit more of heaven on earth can only be a good thing. And I feel the presence of those I've lost around me frequently and know that the essence of a human never travels too far. I miss their physical presence, I weep for their loved ones who feel alone, but I know that they're still around, still here, for in my mind, there is nowhere to go. And that knowledge brings me solace.

Eddie Bluelights said…
A very interesting and thought provoking post, packed with lots of ideas and powerful arguments.
Will have to read it again before I can comment much further but I think you know my stance as a Christian. My cousin was an 'evangelical' atheist and we had lots of 'discussions' about whether or not it was 'curtains' when we die. He was far more intellectually able than I but I left it with him that if he was right then we would both experience curtains but if I was right I would be able to say, "I told you so!" - nice post Breeze ~ Eddie
June 10, 2009 at 6:18 PM

Carolyn R. Parsons said…
Aww Eddie. There are no arguements to be made. There are only theories. None of us knows, we can only identify what feels truthful to us. I know my truth, you know yours and we are all right and the fact of the matter is it doesn't matter, what it is is what it is. I'm pretty sure arguing about the divinity of humankind, no matter what your believe, moves us further from the truth than the different beliefs themselves do.

C. Om said…
Awesome post! I love the way you presented this mind expanding perspective. I share the same theory.
:-)

scribbling sassy said…
I too have often wondered about this,even more when my father-in-law died and left us all hurting and missing. I'd like to think that he is in a much better place but sometimes I also think he's just totally gone like his mere presence.But the latter thought makes me feel lesser of a person, more like a specie, a plant that when it dies it becomes part of the ground.So I shift in between those thoughts, depends on whichever is more consoling for our loss.

Jinksy said…
Refreshing to meet an open minded,light/energy entity with that inner spark that is common to everyone! Why give it a name?! Great post, Breeze.
June 11, 2009 at 11:11 AM

April said…
Breeze..the words of that Cherokee Chief have left a permanent impression on me, for sure.
When my grandfather died, I was about 11 years old. In the middle of the night, I had a vivid dream that I will never forget. My grandpa stood in his nicest suit, with a suit case in hand. He smiled, and his blue eyes shone brightly with love. He didn't say anything, but he waved, winked, and walked away. I woke up and knew he was gone, but it felt peaceful. I heard muffled cries, and when I walked down the hall to my mother's room she told me what I already knew...a phone call had just brought her the news of her father's death.
When my great grandmother died, she also visited me. I was around 18 years old then. But it was different..I was at work and suddenly I just knew she was gone. The message was confirmed later when I asked my mother about it.
Anyhow, I don't know exactly what happens, I just know spirit continues on and physical loss is just that...physical loss.
June 12, 2009 at 11:56 AM