When One of our Own Goes Missing; Help find Loretta 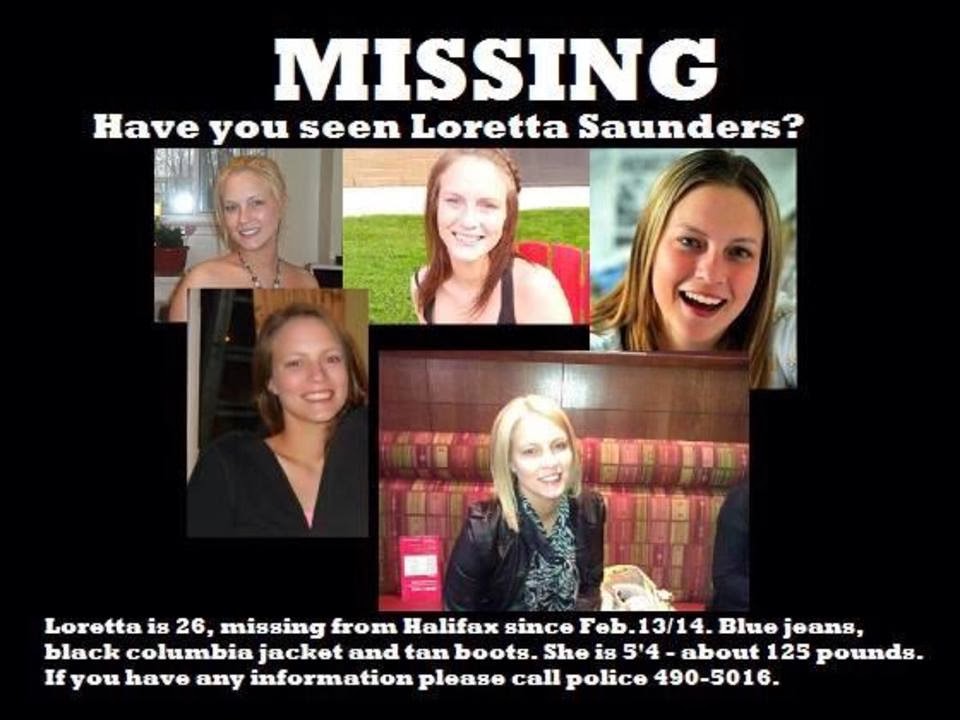 Her family is in that  desperate space between wanting to hope and fearing the worse.  It's a parent's, nightmare, a sibling's torture, a family's worse fears.  It's a space we never hope to inhabit.

The news is full of the Saint Mary's University student's disappearance from her Halifax community on February 13, they have found her car and the people who were driving it in Harrow, Ontario have been arrested and charged with stealing the car.

Law enforcement are considering the matter suspicious now on February 21th, over a week after the Newfoundland and Labrador native vanished.

According to a CTV new article,"Saunders's car was found earlier this week near Windsor, Ont., and Halifax police issued arrest warrants for Blake Leggette, 25, and Victoria Henneberry, 28.
Ontario Provincial Police arrested Leggette and Henneberry earlier this week on charges of possession of stolen property, which were stayed during a court appearance Friday in Windsor.
One of their lawyers said they were also remanded for six days to give authorities from Nova Scotia time to bring them to Halifax."

But news stories only tell part of the story.  To read today's update go here.

When people go missing oftentimes to us they're a name on the television with a photograph.  We are reasonably horrified and express much concern.  Perhaps we pray or show support through social media.

All of these are good things but often after some time we let that slip by and sort of shuffle it into the back of our hearts. Perhaps the reality of the situation is a bit too difficult to cope with.  Perhaps we're afraid to look at a person that could as easily been our family member, our friend.

Still, Loretta Saunders is one of our own.  She is from Newfoundland and Labrador. Her parents reside in the province as do most of her family and friends.  This could easily have been someone from our family.

It hits too close to home to ignore.

So we here in the province stare a little longer at the photo, read a little more.  Do we know the family? Is there a connection?

I read the story of Loretta like all of you and shared it on my Facebook page at which point a friend of mine here in Central Newfoundland messaged me that she was closely connected to the family of the missing woman and her sister, Delilah who is now in Halifax and that the entire family is absolutely distraught  over the situation.  My friend is worried to distraction.  I asked if I could help perhaps by helping in the fundraising effort and she said yes. She wished to remain private and I respect that.  How a person deals with this sort of thing is very personal, some of us our loud and out there, some of us offer support from a quieter place. Each way is valid.

A person is not a newspaper article, a case number or a photograph on a Face Book meme. They are the sum total of all they have been, who they are at this moment and the potential their future holds wrapped up in the intricate web of the relationships and memories they've created from the time of their birth.

The photographs of Loretta  Saunders show a happy person with a full life. She is a graduate student, she is in love, she is three months pregnant. She has so much to look forward to.

Loretta's family knows who she is to them. We can never even come close to knowing, no matter what I write here, no matter what you read elsewhere. Only they know. But what we can do is catch a glimpse of the person through their eyes.

She shares a past with her sister, her mother, her father and all of her family and friends.

She shares her present with all of those people plus a boy friend, friends and faculty at her school and the baby she looks forward to in seven months.

Her potential was summarized in a message from a professor at SMU and Loretta's Thesis supervisor who had worked with her for over 8 months says  "Loretta is a uniquely brilliant student the likes of whom don't come around often. The last time I met with Loretta Saunders, two weeks ago today, I had never felt more inspired and proud of a student. We discussed herthesis project, which she had carefully presented in a proposal that was the best written project I had ever read in seven years of university teaching; teaching well over 1,000 students. I even told her so."


When a person disappears from their lives it rips a hole in the fabric of a family.  Family members tear apart their own lives to try to find the loved-one, trying to stay optimistic, trying to cope.

That concern prompted Loretta's sister, Delilah,  to fly in from her home in Vancouver and she is now there, alone, trying to spearhead a campaign to find clues, to find answers, to find her sister.

Compounding the fears of the family is the fact that Loretta was working on a thesis about the missing and murdered aboriginal women in this country--an epidemic of them--and now has become one of the former.

Adding to the situation for the family is their concern for the sister, Delilah,  there searching  there for days with no one from her family to be with her.  For a time there was no support as she waited for news about her sister all alone, a responsibility no person should have to assume themselves.

Family has met her there now. But it's still a burden.

They simply don't have the financial means to leave their works, fly to Halifax, be there indefinitely. It costs too much for this regular Newfoundland family.

But they are there, today they're doing press conferences, a group are putting up posters and the family is working hard to find Loretta.

Friends have started an online fundraising account to to help the family financially during this time.

I am appealing on their behalf for anyone who can to assist this family.  To help seach for Loretta and to help this family find their missing loved one, to bring them some reprieve from the turmoil of this time in their lives.

After all she is from this province which, related or not, makes her one of our own.

You can help in several ways.

Join the Facebook group  and offer moral support to the family of Loretta Saunders.

It's the least we can do when one of our own goes missing.