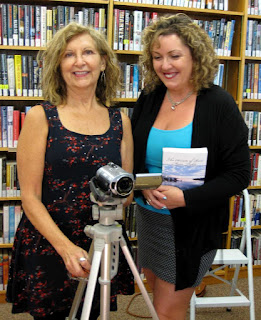 A picture is worth a thousand words as Frederick Barnard once said. (Actually he said it twice and pretended it was a Chinese Proverb the second time but whatever).  Either way, it stands as truth in my life.  Anyone who has read my novel or sampled my poetry must see that my work is very visual.  Even the screenplay I'm adapting from The Secrets of Rare Moon Tickle starts with "Life has always been about colour for me.  This scarlet sunset, that blue sky, the steel grey of the cliffs here at Rare Moon.  I see everything so vividly that perhaps I should have been a painter but instead I doodle with words.  Even love has a colour for me."

These are the words of my character, Christianna but they could be mine, for as I'm writing a scene, it feels like I'm painting.  It will appear before me and while the eyes may see the black print on the white of the page, my imagination has created a landscape on my mind's canvas as if I painted with oil.

So it isn't surprising that I would find great inspiration from the visual arts.  And it also should be no surprise that many of my friends are visual artists.

When the local ART SALON Group of St Marys, Ontario began to work on a collaboration for the Canadian Culture Days events with the theme of Art inspired by Literature I learned that the opposite is true.  That visual artists are also inspired by literary works.  I am delighted to be a part of the event as the only author showcasing my work to the public.

As a member of the ART SALON Group I've also been involved in the organization of this event to some small degree, helping out where I can.  There is a video interview series to be screened, Friday, Sept 28 at 2pm and then a panel discussion that I've also been invited to participate in, immediately after.  I will be at the event signing books on the Saturday as well.

It's quite a production that couldn't happen without the dedication of ART SALON Group gurus Darlean Morris and Rosemary Radcliffe.  Darlean is founder of the Art Salon and a visual artist whose works have been exhibited all over the world from Toronto to Venice!  She has work exhibited in the event in St Marys as well as a piece in the Halifax Culture Days event.  She will be flying there for the opening immediately following our event.

Rosemary is a veteran of Canadian television and film.  Some of her work includes her own television series "Coming up Rosie," back in the 70s, Second City and her role as Tina on the hit CBC show King of Kensington. You'll recognise her, she has changed little from that time, still vivacious and youthful and fun.

Working together, (they call themselves Bad Hair Productions) on the video, the event and the all of the details that go along with both, they've set the stage for what I believe will be a seamless and successful week of culture for local residents.  I'm proud to be a part of it.

Culture Days are Sept 28, 29 and 30 and the art show will continue at the Library until October 5th.

We hope locals can make it in.  I would love to see you there.  For all others there will be a follow up after the event with pictures!