Come Get Lost in my City with Me! 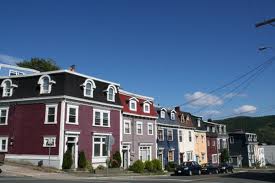 I adore cities. For someone who grew up on an isolated slice of heaven on the North East Coast of Newfoundland, that might seem odd. For me, it's the way I'm made. I love them. I adore going to Toronto. I remember the first time I came to Ontario, I walked out of Union Station where those massive pillars are and my first thought was, I want to get lost here. I want to spend the rest of my days just finding my way around and exploring.


I touched one of those pillars and I could feel all of the energy of every person who had touched them before me. They vibrated with life and history and were proof of the incredible will of the human creative spirit! Cities speak to me and they say, on behalf of all humanity, Look at what we've done! Look at what you can do!

And next week I get to go to the oldest city in North America, St. John's, Newfoundland with an eye to moving there or near there in July. I am so excited I could burst. I've been told I'll get get sick of the weather. I've been told, the fog will drive me crazy. It's crowded, and omg the crime rate is crazy now!

And all I can think is, I'm going home!

St. John's is unlike any other place. It is a port city first of all, which feeds my need for variety and change and an ocean view. It is incredibly beautiful, set among cliffs and around a sheltered harbour with the ghostly spectre that is Cabot Tower floating in the distance on a foggy night and the incredible majesty that is the Basilica punctuating the skyline and claiming it for her own.

I like to get lost walking in downtown St. John's and it's easy for me because all I know really is down hill is the water, up hill is the way to the University...that's all I need to know. St. John's is a city for the senses. The smell of the ocean and the working harbour are distinct and familiar. Music wafts from tiny stores, O'Brien's being one of my favourites, but many other stores play traditional tunes.

The music, oh the music. The art. The imagination. The creativity. This city has inspiration embedded right into its bricks and mortar! The people are without a doubt the friendliest on the planet and their chatter and laughter fill the air and I'm never lost alone.

The very air is rich with the buzz of life and the smell of food cooking. The city vibrates with the old and the new, peace and adventure, the hallowed and the lively. Best of all, it's a helluva lot of fun!

Of course, I have no idea where I am. I am wandering and I am transported to exactly where I'm supposed to be. I am lost and I have never been so at home anywhere. The damp curls my hair and I smile.

Oh the character of this place! Turn a corner and the twist of a wrought iron fence catches your eye, round a bend and a row of brightly painted houses lined up like multicoloured-dominoes bring a smile! Walk further along and a cat on a front stoop stretches and gives you the eye before tucking its head back under a warm paw.

A fog horn sounds in the distance as a stranger tips his hat and nods with a wink. There is a cabby who stops and lets you cross the street and the smell of fish and chips, the best on earth, pulls you from your reverie.

I can feel the history of this city through the soles of my feet. I can almost hear the ancients' voices on the waterfront intermingled with the hustle of the modern day workers. I can feel the energy of all who went before and all who are there now. There is laughter and music that runs from one end of the city to the outskirts. It has a flavour that is a Neapolitan ice cream mix with a bunch of nuts thrown in.

I'll be there around March 15th. I'll be visiting some old haunts like The Duke and Erin's Pub. Wait...I forgot to mention George St. It's where the bars are! St. John's nightlife is wicked awesomesauce and poutine! Funny how my terrible sense of direction doesn't affect my ability to find a pint of Guinness in a favourite drinking hole! I think I have pub radar!  Not that finding a bar is a great difficulty in this city!

So come find me while I'm happy and wandering.  I love being lost and gallivanting aimlessly with friends most of all! I'm a helluva good straggler, lots of fun while I'm lost! Perhaps especially while I'm lost!

I'm going home and I'm lost, even in the idea!