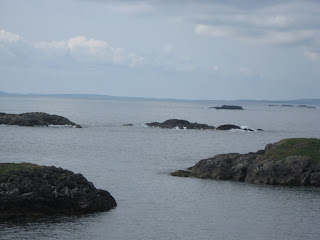 As a general rule I don't try to explain my poetry, letting it sit there and be interpreted by each person who reads from their own perspective.

Yesterday I wrote two poems and I feel both need a little bit of an explanation.

The one I posted yesterday was called Recognition which might have been interpreted as a love sonnet to a specific person but it was more my musings on the people I have known in my life, and who are yet to come into it.  Someone posted this question on their Face Book wall.  How long does it take someone to fall in love?  I posted I don't believe in falling in love so much as that sometimes your soul has an instant recognition with another soul.  Sometimes you meet someone and feel that instant connection.  These may or may not be romantic relationships but sometimes they are just deep I feel like I have always known you  connections.  I think of my friend Brian as one of those people.  We had this friendship that was completely undefined and free, it wasn't romantic in the traditional sense yet it was perfectly real and loving.  In fact the last time I saw Brian, the last words he said to me were "I love you."  He passed away a few months later at the age of 41.  I still miss him.  And there have been and are and will be many more such connections.  If you come upon them, don't dismiss them, but also, don't try to mold them into something solid and don't label it either.  Just let it be and enjoy it.  Our connection to other humans is necessary to sustain happiness and to grow into the people we ought to be.  They are as valid as any life-partnership you may have and enrich your spirit in ways that are indefinable and invaluable.

The second poem, may or may not be finished.  It was inspired by the recent earth-shaking events happening all around the world.  And I mean the literal ones, the earth quakes and volcanoes that have made us all too aware that we are not the ones running this show, we are at the mercy of the rocks that we live upon and the forces that placed those rocks where they are and will decide when it's time to move them.  The poem is called "Between the Stones" and I was asked what the stones meant.  I explained that it could be "metaphorical stones," those that we mark the passage of time, crosses on the calendar for example or perhaps it could mean between the infinite planets and comets and other stones that float around our universes and the space beyond our universe.  Or it might mean literally the stones beneath our feet that we live upon and are surrounded by.  You choose one or all.

Here is the poem.  It's not my usual sort of poetry but this is how it flowed.