The Art of Extreme Self-Care 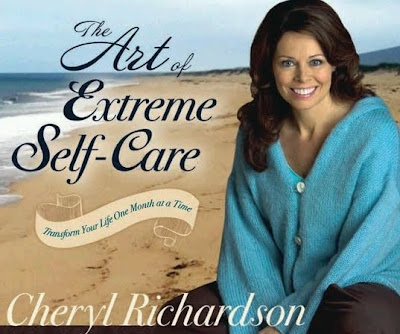 I recently won a book in a contest at the Heal Your Life website
and a few days ago it came in the mail. It's called The Art of Extreme Self-Care by Cheryl Richardson and finally yesterday I decided to sit back and read it.

The book is Cheryl's personal journey in learning how to take care of herself. It is also a month long calendar of things the reader can do to make changes in her life that lead to extreme self-care.

She delves deeply into several instances where she lets herself go in order to take care of others, something that is her default due to her upbringing. This book is obviously geared toward women and rings true on so many levels.

Women are expected to be the nourishers, the organisers, the cleaners, the centre of the universe for those who surround them, their children, spouses, extended family, co-workers, volunteer organisations. It's a role that we often fall too far into. We then end up resentful and end up doing the old "woe is me" and "nobody cares" option all too often.

One thing she does say that helped her was learning to ask for help. She is married to a wonderful man who wanted to help her but because she didn't ask, didn't know what to do. He spent a lot of his time in a haze of confusion because he didn't help, was the target of anger and had no idea why.

I know in my own life, I used to feel resentful even if I had to leave a list for my husband of things to do because I think "he should just know this stuff. I know this , why doesn't he?"

Then I realized, he's away a lot, he has his own idea of what's important and he wasn't raised to be the nourisher, organiser, cleaner, centre of the universe. Those expectations simply aren't there for him. He has others and he fulfills them quite well. Plus he's a super-good guy and wants to make life easier for me and he's quite willing to complete the list. If I leave a list on the honey-do board it invariably gets done. I would resent doing the things on the list in addition to all of the other things I do so I no longer resent making the list. Now if your husband refuses to follow the list or help out, that's a whole other problem and I'm sorry.

If you do not have a spouse then look around you for other support people. Perhaps your parents, a cousin, best friend could run an errand, take over a volunteer spot or drive the teens to the mall. Perhaps you have to disappoint all of those people and simply say no.

Cheryl called her list "Things I need you to do so that I feel supported". And this is the truth of it all. We need support, emotionally, physically, mentally in order to avoid burning out in our lives. I see people shut down on a regular basis, wind up on medication and medical leave simply because their plate was too full.

Learn to say no. Learn to say it graciously and honestly. A honest no is better than a resentful yes. "I'm sorry I can't help you with that, I've made the decision to cut back on a few things for my own well-being." is a simple sentence that can help you do so. Learn to accept that you can, that it is allowed, that no is a valid option.

Perhaps it will give someone else the opportunity to learn how to do something, perhaps you will give them the gift of self-reliance. It's not selfish to disappoint people at times for your own benefit. It is essential.

I have learned in my own life to also say yes to things that bring me joy. I made a huge effort in the last year to put aside time for my things, my writing, to say no to a few people and turn down a few things that sucked into my time but didn't fulfill me. It has made all the difference. When I look back on it now, no one really suffered for it either. It was well worth it.

I have worked really hard to only take on the things that I can do without becoming stressed and overwhelmed. To the outside world it probably looks like selfishness and laziness. To my inner world it feels like Peace!

Not a soccer mom said…
Beautiful! I will look into this book as well.
We all need to learn to take help when offered and turn down the extra and stressful things.
Especially single mothers who for some reason feel as though we have to prove that we can do it alone.
January 21, 2010 at 5:07 PM

RNSANE said…
Amen, Breeze, as a nurse in the field of adult and child sexual assault, I learned early on that I could not give to others if I did not care for myself first. In this work, I covered 24/7, along with a small group of other nurses, and answered crisis calls, did adult sexual assault exams, and responded to assist with child exams, dealt with families, the police, social services and the multiple case management issues. It was wonderful work but, definitely, traumatic for all. We nurses took care of each other, offered support, and learned what we needed to do, individually, to nurture ourselves. I remained in this role for 21 years until the city and county of San Francisco ended my job in massive budget cuts in Feb of last year.
January 21, 2010 at 5:52 PM

Shadow said…
all too often we end up being resentful about something we could have asked help in... that sounds like a great book.

Carolyn R. Parsons said…
This is a great book. I enjoyed it. It covers a lot of ground but is an easy read with a very useful set of tools for personal growth. I haven`t written in it though. I have my own journal.

Shadow..glad you`re enjoying it! Glad you got it! You`re so far away :)

Marguerite said…
Sounds like a wonderful book! Thanks so much for the review. Great advice too! You are lucky to have a husband who's willing to complete your lists!
January 23, 2010 at 1:15 AM