What is your calling card? 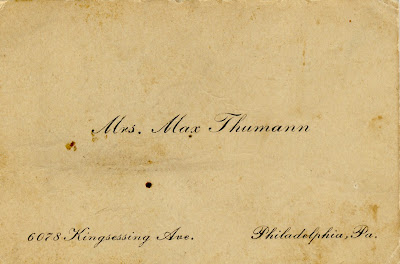 Back in the olden days a calling card was left behind if someone dropped by to visit and you weren't there or were otherwise engaged. It gave your name, title and address. There were complicated rules back in those days and when you didn't have time or really didn't want to visit you would just pick a time when you knew the person was out and drop a card. That way you had done your duty for society without having to actually visit someone. The card itself basically identified you to the homeowner. And often there would be a little dish of the host's cards and the visitor would take one from there for himself.
It was a delightful little ritual and I assume our modern day business card evolved from that.

I was listening to a call in radio show on Hay House Radio a few days ago. The lady had called in and said she was having trouble putting her life in order, she had had a terrible thing happen early in her life and this seemed to be a determining factor in all of her decisions. It had impacted her decisions and played with her opinions of herself to the point that she was stuck in her thinking, all if it revolving around that one incident, not getting past it and now, realising she'd wasted all of her life using that as her excuse for not doing things, so, on top of the event itself, she was now feeling guilty that she'd wasted her time and given her power away in that way.

The host said "you have a calling card".

What exactly is a calling card in this context? My understanding is "it's the excuse you use for your behaviour". I'm going to give you an example that springs immediately to mind.

About 20 years ago I met a woman in her early thirties. Within five minutes of meeting her she told me how she had been brutally raped in the park at 16. This was her calling card. She had very odd and erratic behaviour beyond that. It is very hard to explain but she generally jeopardized her relationships by having affairs and doing things that most ordinary men wouldn't be able to tolerate. She, time after time, destroyed her own security with alcohol, drugs and sex. And she wanted to change. She wanted to grow. She cried to me that she was horrible. But she'd been raped when she was 16 and had not ever moved past, gotten over it, and as such given her own power over to a violent stranger at 16. I've lost touch with her over the years, I hope she is well. At that point though, she'd been carrying that card with her for almost 20 years.

And the thing about a calling card like this is that it is insensitive of me to judge her for her behaviour, after all, I hadn't been violently raped at 16 in a dark park. Who knows how I would have responded to such an event? It would be insensitive of me to point this out to her and say "Hey get over it" because I have no understanding of her life. So people with such calling cards often repeat over and over their patterns, offering up their sad stories as calling cards, offering them as reasons for their lack of control in their lives and then, blaming the event in their past for the chaos.

We all have them. We all have calling cards of some sort, the print on some more difficult to read. Sometimes we don't offer up the calling card, we hold it inside of us, reading it ourselves, but we're still using it.

The advice that was given to the woman on the radio who had this terrible event happen to her, was to never speak of it again. At first I was taken aback but then he went on to further explain that she must stop using it(she knew that) and then she must get over the guilt of ever having used it in the past(because that was how her psyche protected itself for years) and move beyond it. By the end of the call you could hear relief in the woman's voice and she broke down in sobs. When the host asked her why, she said she felt free of it finally.

This isn't about minimizing the terrible things that happen to wonderful people. It's about taking back your personal power from whatever event or whoever took it from you. About not allowing those events to block you from living a completely fulfilling life. It's about moving forward and being free! Putting the past in its place and taking the lessons from the past only, but leaving behind the event itself.

What is your calling card? Is it time to lay it face down on a table and walk away? If it's impacting your life and preventing you from moving forward into the place you want to be, lay it down, never use it again. All life is a choice, all cards the luck of the draw, they are not your fault, you didn't choose that card so you are not responsible for carrying it with you wherever you go anymore. Toss it away! Pick up a new calling card if you have to!

Mine says "I am Breeze, I can do anything and nothing can stop me!" There are an infinite number of copies of it! Take one from the dish, insert your name and start using it today!

Debbie said…
love your calling card and love your post!! it spoke to me on so many levels! There was a time 'being divorced' was my calling card..then being a 'single mom'..slowly I am working beyond that and trying to have a calling card that is not an excuse for my behavior but an explanation of my strength!!
August 10, 2009 at 10:39 PM

Shadow said…
i think many many of us have a calling card of our own. it is, however, our own responsibility to 'get over it' as such, so that we can live a free and satisfying life. otherwise, all we would be doing is using that card as an excuse to validate our bad behaviour, and that is not right. excellent post!
August 11, 2009 at 1:34 AM

Your calling card is grat.

Made me think i have some serious work on the design of my card.

Sara Diana said…
This is a very powerful blog!

Yes, I DID have a negative calling card for many years, the ignored child, the unvalued child, the insignificant one. However, I finished therapy in 2008 and for the first time in my life, I ditched that card and it was such a moving and freeing experience.

Daria said…
Wow that sure makes me think back in my life. I've definitely had different calling cards throughout my life.